Another major provider of VPN services, ExpressVPN, is striving to protect the privacy of their users worldwide with just a few clicks. Their award-winning apps for Windows, Mac, iOS, Android, Linux, routers, and browsers secure user information and identities with superb encryption and leak-proofing. Each week, they add new servers to their pool of 2,000+ servers across 94 countries. Based in British Virgin Islands, ExpressVPN have been providing fast connection and uncensored access to sites and services across the globe since 2009.

*Choosing a 15 month subscription. Shorter periods available for a slightly bigger price. Some of the information and technical data is taken from ExpressVPN homepage. 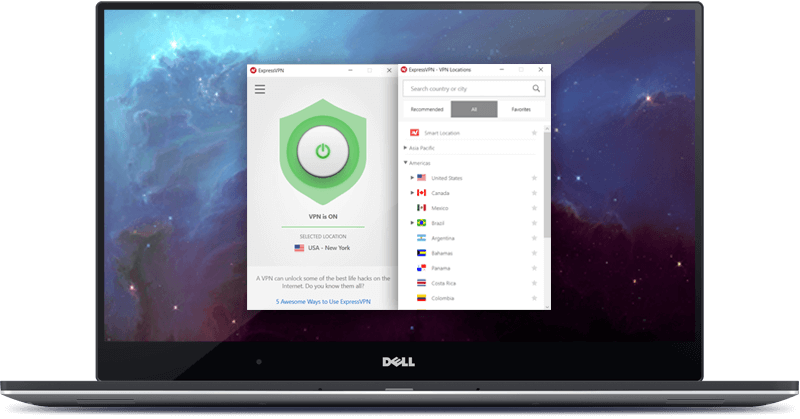 The company behind the service claims to be “a vocal advocate for Internet freedom and privacy,” offering financial support to nonprofit organizations like Electronic Frontier Foundation, the Internet Defense League, Fight for the Future, and Access.

Located in British Virgin Islands, a Jurisdiction which has No Data Retention Laws . Countries like British Virgin Islands, Switzerland, Singapore, Caymans, Panama, Often VPN are independent countries that don’t have retention laws and don’t require companies to store their customers information. In case of ExpressVPN, its no-log policy was publically tested by accusations regarding the company’s alleged involvement in attempt to cover up details of a high profile assassination. In 2017, it came to light that their VPN service and its leased servers were used by the assailants to cover up Russian diplomat Andrey Karlov’s assassination details. There were strong allegations that an unknown accomplice of the assassin used ExpressVPN to log into his accounts on social media in order to delete the evidence that might incriminate him. This accomplice was said to have used VPN servers that ExpressVPN had leased in Turkey. ExpressVPN found itself right at the epicenter of international political turmoil. The statement released by ExpressVPN to the Turkish authorities in January 2017 made it clear that they don’t store log details and personal information of their VPN users. That means they don’t track the time or duration of any online session, and neither do they keep logs of IP addresses or servers used, websites visited or files downloaded.

P2P servers - Many web services and VPN providers try to discourage you from using VPN with P2P by throttling your bandwidth and intentionally slowing down the Internet service. Even though Express VPN doesn't actively promote torrenting, they support P2P/torrenting.

Add-ons. ExpressVPN has an option called Network Lock, which is basically an Internet Kill Switch technology which automatically stops either selected programs or the whole device from accessing the web once a VPN connection drops. Network Lock is designed to prevent your network traffic from going outside the encrypted VPN tunnel. Split tunneling - VPN split tunneling lets you route some of your device or app traffic through the encrypted VPN tunnel while other devices or apps maintain direct access to the internet. Exist two states of tunneling, first option would be choosing Split Tunneling function which keeps all connected devices or applications protected except for those specifically excluded. The second option is Inverse Split Tunneling which protects only selected devices or applications, while everything else flows outside the VPN.

Speed We personally experienced about 15% loss of speed connecting to a neighbouring European country. Connecting to USA’s East Coast we saw about 30% decline in speed, and connected to Hong Kong server we saw around 50% drop. So depending on your and server’s location speeds can vary. Disabling VPN would be preferable if you plan on online gaming.

Zero-Knowledge DNS ExpressVPN is a VPN service that has its own private DNS. This means that unlike other VPN services, ExpressVPN doesn’t use Third-party DNS servers that log personally identifiable data, such as when and where from did you try to access a site, from your traffic. Anyone with the access to that server could check DNS logs that trace back to you. Whenever you’re connected through ExpressVPN, your DNS activity is protected by the same encryption and tunnelling protocol that covers the rest of your Internet traffic.

Netflix BBC, Amazon or any other video streaming platform will be available to you while on Express VPN network. While using this VPN you will be able to access any Geo restricted content simultaneously on up to 3 devices.

The only problem we have encountered was older iPhone unwillingness connect to app. But after contacting support and recieving manual setup to install vpn profiles to iphone it seem to do just fine.

Based on their track record and their performance we can clearly see why ExpressVPN is market leader.